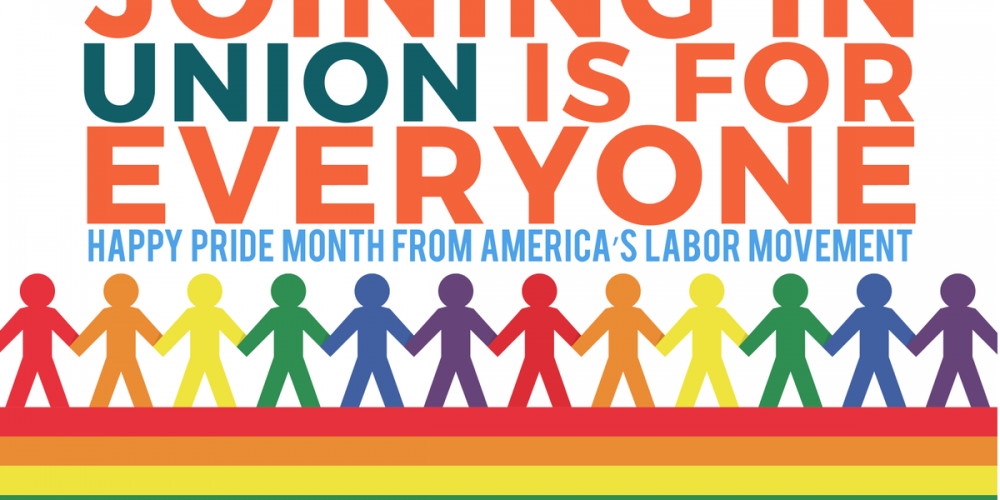 As 50,000 Culinary Workers members in Las Vegas fight for fair pay and good benefits and as the first group of workers at Boeing Co. in South Carolina choose to join the Machinists (IAM), America’s working people celebrate worker activism and the start of Pride Month. June is an opportunity for all of us to consider the close bonds between the labor movement and the LGBTQ community.

Working families in all our diversity are ready to stand united for dignity, fair pay, good benefits and strong communities.

Message of the Day – Proud and Powerful

America’s labor movement and the lesbian, gay, bisexual, transgender and queer community cannot be separated, and we are particularly united today because the attacks on both LGBTQ equality and worker freedoms come from the same dark web of corporate interests.

LGBTQ workers have relied on union contracts to secure protections not yet provided by law, and many of the advances of LGBTQ rights have been explicitly related to workplace equality.

Today, labor groups like Pride At Work are championing the freedoms of LGBTQ workers by fighting against discrimination and educating the public about using union contracts to protect all workers.

The AFL‑CIO supports all working people as we continue to grow a powerful movement to write new economic rules so all workers can win fair pay and good benefits, regardless of sexual orientation or gender identity.

67%: That’s the portion of Americans who agree government officials should serve all of the public regardless of their religious beliefs.