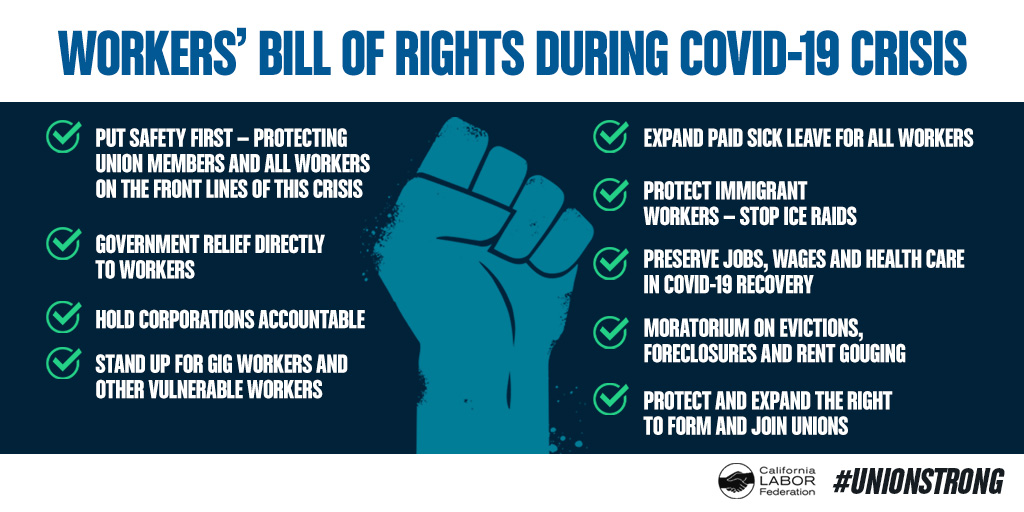 The COVID-19 crisis is devastating workers in every industry.  This crisis is also exposing the gaping holes in our social safety net and laying bare just how rigged this economy is against workers and our families and how tilted it is to the wealthy and powerful. It’s time for decision-makers to hear from us about what we demand to weather this crisis and the changes we need to create an economy that prioritizes working people going forward.

We need to act now so that working people won’t be left left behind without an income, without a home and without basic protections. We cannot abandon working families in this time of overwhelming need.

The labor movement has made it clear that we need a new deal that makes a real difference in improving workers’ lives during this pandemic and beyond.  As the crisis grows, California’s unions are demanding workers are protected.

From first responders to grocery clerks to health care workers to delivery and gig drivers to public servants, working people are risking their health to provide the basic necessities we all need to get through this crisis. Workers need proper safety equipment, free COVID-19 testing, affordable, accessible health care and treatment.

Any economic stimulus must provide relief directly to working people. While government checks to workers help, we need much more. Wage replacement, unemployment insurance, expanded safety net programs, job protections and health care, among other remedies, must be directly extended to workers, and workers who are unbanked must be able to access government aid without being charged steep interest rates by unscrupulous companies.

No-strings-attached bailouts to big corporations are unacceptable. No bailouts should be given to big corporations – many of which used massive tax breaks to enrich shareholders instead of increasing worker wages – that exploit or cheat workers and/or don’t pay their fair share of taxes.

4) Standing up for Gig Workers and Other Vulnerable Workers

Hundreds of thousands of gig workers are living on the edge, working through the crisis, because they’ve been deemed “essential.” Yet these workers have virtually no protections. No paid sick days. No job protection. No minimum wage. No health care. Gig companies must immediately follow the law by making these workers employees so that they are eligible for all the basic protections they deserve under the law. These companies must also immediately stop shirking their responsibility to all workers and begin paying into the social safety net, including unemployment insurance, Social Security and Medicare. All companies must immediately comply with the law under AB 5 to provide basic protections to misclassified workers on the job without a safety net.

While California is one of just 11 states with a paid sick leave law, many workers are still being left behind. In addition to following temporary federal guidelines for emergency paid leave of 14 days for some employees, California should expand paid sick leave to include ALL workers at 14 days for all employees – permanently — and provide paid leave to all misclassified workers, including gig workers, under AB 5.

We demand an immediate moratorium on ICE raids, deportations and other attacks against our immigrant communities. Immigrants who are sheltering-in-place or going to work to provide the services we all need shouldn’t be living in fear of ICE. We also demand a comprehensive approach to supporting undocumented families who are among the most vulnerable populations during this crisis.

Millions have already been furloughed or laid off as a result of the COVID-19 crisis and the jobs crisis will gets worse before it gets better. As the virus recedes and the economy slowly moves back to normal, it’s paramount that workers are promptly recalled with the wages, health care and seniority they’d earned before the crisis firmly in place. It would be catastrophic to workers and the economy to allow corporations to use this crisis to create further economic insecurity for workers. In fact, we must be laser-focused coming out of this crisis in reducing income inequality, strengthening the social safety net and rebuilding our economy from the bottom up with good jobs. We also call on state and federal government to pursue policies that give low-wage workers – many of which are people of color – greater economic opportunity and access to good union jobs.

State and Federal leaders must immediately place a moratorium on evictions and price gouging of renters, and bank foreclosures of homes. In a time of public health and economic crises, it’s immoral to take away the most basic of necessities – shelter – from families. Further, we demand more support for the already unsheltered including safe, secure temporary housing.

9) Protect and Expand the Right to Form and Join Union

Now more than ever, working people need the ability to stand together and speak in a collective voice to ensure they are treated fairly as this crisis evolves. A union on the job gives workers the ability to negotiate with bosses to make sure that they get a fair shake as companies react to the crisis. It’s absolutely critical that more workers have the right to join unions to provide a counterbalance to an economy that was already rigged to the benefit of the wealthy and powerful, well before this crisis.

TAKE ACTION: Add your name and demand we implement a Workers’ Bill of Rights during the COVID-19 Crisis here