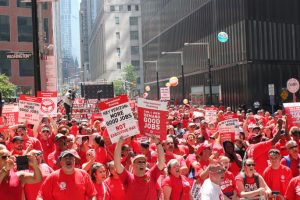 Negotiators from the International Brotherhood of Electrical Workers (IBEW) and the Communications Workers of America (CWA), representing nearly 40,000 striking Verizon workers, announced they have reached a tentative contract with Verizon.

“This agreement will keep good middle-class Verizon jobs here in America, while getting our members back to work serving the consumer,” said Boston Local 2222 Business Manager Myles Calvey. Calvey chairs IBEW System Council T-6, representing IBEW Verizon workers throughout New England. Striking workers will return to work on June 1. Details of the tentative agreement are being provided to members who will vote on its ratification after their return to work.

Under the proposed agreement, Verizon agrees that no additional jobs will be outsourced overseas, and agrees to increase the number of calls routed to domestic call centers. This will result in the creation of 1,300 new call center jobs including 850 in the Mid-Atlantic region and 450 in the Northeast.

Also included in the tentative four-year agreement are: