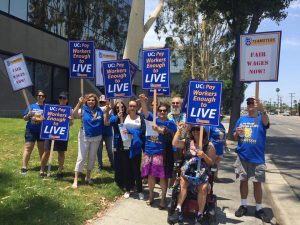 On June 7-8, Teamsters – Local 2010 CX Bargaining Team met for the fifth time with UC and put forward the union’s opening wage proposal. The Teamster proposal is current, fair and justified after two decades during which UC drove down real income by 24%. This made it so 93% of workers were paid too little to meet a basic family budget. Despite the impacts on worker livelihood, UC has not yet agreed to fair raises. Rather, the “sunshine” document proposed to remove guaranteed raises in favor of so-called “merit pay,” which is nothing more than favoritism. Teamsters expect a counter offer from the University at the next bargaining session scheduled for July 5-7 and anticipate a proposal that is fair to the worker’s, whose hard work is responsible for the university’s day-to-day operation. We ask for your support, standing in solidarity with all UC Teamsters for equitable employment contracts.

Members will participate on a rotating basis during their lunch breaks to join in cheers of: “Hands off our Guaranteed Wages!” and “Pay Workers Enough to Live!”